skip to main | skip to sidebar

A revolutionary machine that transforms shredded office paper into toilet paper!! Yup you heard it right! The useless shreds of paper has a role now, an important one!

10 tips before you come to Japan..

Posted by subzero at 01:44 4 comments
Actually this post is not mine, it is for kirainet.com, but I found it very interesting and useful. Please note that these tips are for those who come to Japan as tourists.

1.-Do not worry
Yes, Japan is very weird, very different, but the Japanese aren’t going to eat you raw as if you were sushi! Japan is one of the safest countries in the world, it has an impressive transport network that makes tourism easy, the whole country is full of signs (sometimes only in Japanese) and there is 127 million Japanese willing to help you in case you have any problem. With this, I mean you won’t get lost and you won’t miss anything in Japan. Above all, Japan is a “useful” country (Are you climbing up Mount Fuji and you feel like having a coffee? There you have a vending machine!). Summing up this first tip, even if it sounds a little bit silly: the only thing you should worry about when you come to Japan is the Japanese language.

2.-Buy a Japan Rail Pass
The best thing to do when travelling is using the trains from the JR network (Japan Railways). The cheapest option is to buy a Japan Rail Pass that will allow you to travel on a “flat rate” basis using any train from JR all around the country. You can ONLY buy this pass outside Japan, so ask your travel agent of choice for information. You can find infomation in this website. The typical question is whether it’s worth the price to buy the JR Pass. The answer is YES. It is really worth it, so do not hesitate to buy it. It’d be a huge mistake to come to Japan as a tourist without a JR Pass.

3.-Plugs
Electricity in Japan runs at 110V and 50Hz, and plugs have a different shape. I recommend you read the small print on the transformer of the device you want to bring. If it says, for example, INPUT: 100V-240V (from 100V to 240V), there’s a good chance you won’t have problems when using it in Japan. If it only says INPUT: 2**V, you may only use that device in other countries. In that case, you’d have to buy a transformer that’d probable cost you between 20 and 50 Euro depending on amperage, blah, blah, blah… I recommend you only bring devices with the INPUT: 100V-2**V thing. Nowadays, most laptops have those universal transformers, but mobile phones, for example, don’t. As far as the plug is concerned, I recommend you to go to the first electronics shop you find when you arrive here and buy an adapter, which will cost somewhere between 200 and 500 yen depending on the place.

4.-Mobile phone and Internet
Most European/American phone companies offer roaming with Japanese companies. Before coming to Japan check if your company offers it! You may also rent a mobile phone at Narita Airport when you arrive. Ask at the information desk and they’ll nicely help you find the renting place, etc. You may also rent PHS cards for your laptop which will allow you to surf the Internet anywhere in the country. They say you can even get a connection with a PHS card on top of Mount Fuji.

5.-Japanese language and manners
Learn how to say a few things in Japanese, like ARIGATOU (Thank you), SUMIMASEN (Excuse me), etc., and the Japanese people will surely appreciate it. Also try to bow as a sign of gratitude when someone helps you during your trip.

6.-Electronic devices shopping in Japan
There is this myth that says that all electronic devices in Japan are supercheap, the cheapest… and maybe that was true in the 90’s when we still were “globalizing”. Nowadays prices are very similar to any place in Europe/North America, and even some things are more expensive here. For example, laptops are usually cheaper in Spain than in Japan. The only thing I recommend to buy in Japan is digital cameras because, due to the huge competition among Japanese companies in the local market, sometimes they can be between 50 and 100 Euro (depending on the model) cheaper than in Europe/North America.

7.-Accommodation
You may stay at a traditional Japanese hotel or Ryokan for a few days, or at a regular hotel, or at a youth hostel, etc. Choose where you want to stay and send an email in very simple English to make your reservation. As for the prices, finding a place to stay for less than 10,000 yen in Tokyo is cheap, and outside Tokyo, less than 7,000 yen a night is cheap.

8.-Route
The basic route would be: Tokyo, Nikko, Kamakura, Yokohama, Kyoto and Nara. You could extend that to Okinawa, Hiroshima, Hokkaido, Osaka, Izu, Nagano, and any other place far from the big cities that you can think of.

9.-DVDs
If you com from Europe, there is no problem, Japan uses the same zone as Europe. If you don’t know Japanese, make sure it has subtitles in English before buying it.

10.-Misc.
The weather in Japan changes very quickly. You wear a t-shirt one day and you may need a jacket the next. In summer, the heat is very humid, but they set the AC system to freeze indoors. It normally rains a lot, but don’t worry because this is the country with more umbrellas per square inch in the world. It is easy to find one laying around on the street, so don’t bother wasting space in you bag.

Posted by subzero at 04:33 2 comments
Homework is fun, especially if it is the Japanese way.

A while ago we had a writing homework to do, in Japanese. The homework was to describe specific scene and write about them from different point of views. Here is the scene of our last homework:


It was fun, yeah. But never an easy task. At the end, we sure learned alot!
Creative, eh?

Posted by subzero at 00:27 6 comments
Do you see the lines on the ground appearing in this picture? 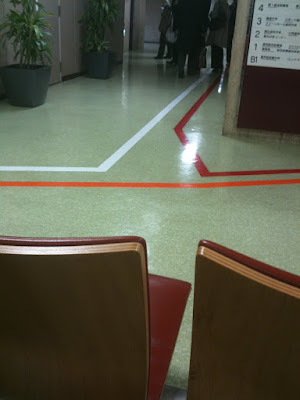 Why are they there?
This is a public hospital in Tokyo. Why would they draw lines on the ground?

Can you think of a good reason?

Ok I will answer you now.

Lines in this hospital are everywhere, and in every color. Lines simply connect offices together. So when you (or the ill 70 years old man) come to an office, they process your papers and then just tell you "Please follow the red line and submit your papers there". Or "Please follow the yellow line and wait on the chairs there until your name is called"!!

Yes. No more giving directions. No more turn right, turn left, or search for a desk or window. Just follow the line. As simple as that, and convenient for the majority of hospital visitors: ill people!

Our visit to the city of Kawagoe..

Posted by subzero at 09:28 2 comments
We were invited by our Japanese friends to visit their city, Kawagoe in Saitama.

The feeling was indescribable. The old city of Kawagoe did a great job in keeping its influence on us. It is my first time visiting an old typical Japanese city, and I could notice a lot of difference compared to Tokyo. It was a refreshing experience away from the metropolitan atmosphere.

I will leave you with some pictures. 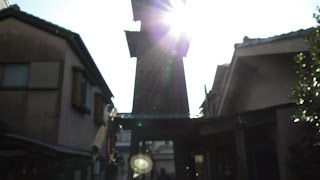